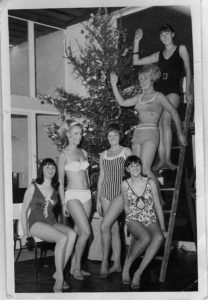 Made in Shrewsbury has invited the established theatrical creative team of Chris Eldon Lee, Maggie Love and Mary Keith to create a new musical play for Shropshire, based on our research into the wonderful story of the county`s former ladies underwear and swim wear manufacturer Silhouette.

This community play will be performed in the new Theatre Severn Shrewsbury in the week to 21st November 2009 following a short run in the Drayton Festival.

This work will be funded by The Arts Council and National lottery Fund.

SILHOUETTE – the perfect play for anyone who’s ever worn underwear.

A brand new sixties-style musical play is to be created about Shrewsbury and its famous ‘Silhouette’ underwear factory.

The play is to be performed in the town’s new ‘Theatre Severn’ in November and organisers are appealing for former ‘Silhouette’ employees to contribute their memories to the storyline as soon as possible.

A coffee morning has been arranged for Saturday 17th January for ‘Silhouette’ workers to swap stories. Willing interviewees can also be visited at home.

The project is the brainchild of Nigel Hinton who runs the ‘Made in Shrewsbury’ group which researches historic Shrewsbury manufacturers. “ ‘Silhouette’ was such a remarkable success story it lends itself beautifully as the main theme of a brand new musical play about Shrewsbury,” said Nigel.

Writer Chris Eldon Lee and producer Maggie Love have been commissioned to create the show. Their production of “Arthur’s Plough” – about Shropshire’s famous Fordhall Farm – was seen by 1,400 people last summer.

‘Silhouette’ was a major supplier to Mark and Spencer. It sold its underwear to 61 countries and was the largest swimwear factory in Britain. At its peak it employed around 3000 local people.

Author Chris Eldon Lee said “I reckon this is a perfect recipe for theatrical success; combining social nostalgia, local history, a period pop band, The Mere Singers and lots of rather amusing 60s underwear! But the play has to be based firmly in truth; which is why we are keen to hear people’s stories and see their memorabilia.”

An Art’s Council grant has been announced this week and organisers are now in the process of securing additional funding. Marches Care of ‘The Uplands’ at Oxon and chartered accountants Andrews, Orme and Hinton Ltd have already signed sponsorship deals. ‘The Shrewsbury Chronicle’ is making its extensive archives available for the play to reflect the rapidly changing face of the town in the 1960s.

“Many of the story lines will be drawn from the interviews we do with former ‘Silhouette’ workers,” says Chris. “But we will also search ‘The Chronicle’ reports of the time to get residents’ reaction to local and world events – from ‘The Beatles’ at ‘The Granada’ to the Moon Landings. Social issues in the play will range from the arrival of the birth pill to the devastating effect of tights on the underwear market.”

If you would like to attend the ‘Silhouette’ coffee morning on the 17th January or contribute to the project in any way at all please call 01743 363 365 during office hours.