No flowers please but donations to Macmillan Cancer Support

Frank died peacefully aged 90 on 6th Septembe;r following an earlier stroke, he was in Surrey near to his children

Frank was born 1920 in Chorzow, Poland.He moved to England in 1947 and gained a degree in Economics at LSE, he then went on to qualify as an accountant.

He joined Silhouette in the London office straight away and quickly gained promotion; he and his family relocated to Shrewsbury in 1969 where he became Managing Director of Silhouette.

Frank left after the takeover in 1979, he bought and ran a nursing home in Birmingham. He was passionate about golf and played at Hawkestone and Shrewsbury Golf Club and continued to play until recently.

A staunch Catholic he attended Mass regularly and his faith gve him strength when his wife Rita died in 1985 aged 53. He was a strong family man and he leaves children and six grandchildren.

An illustrated Lecture by Nigel Hinton

Party for the company and helpers at Lord Hill 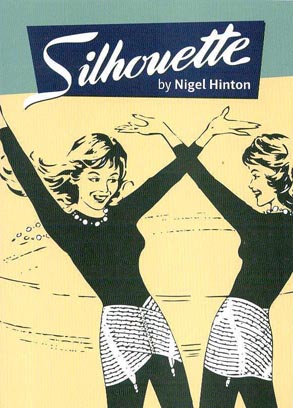 Inside Out to broadcast TV program based on Silhouette.

Re-run of the play sells out in hours.

Ticket Sales for re-run suspended whilst arrangements are made for thursday ticket holders to be reallocated seats.

Audiences love the play and so many favourable comments have been made the producers are delighted that everyones efforts have been received so well.

Tonights play was abandoned just before the interval when a member of the audience had a heart attack and died. As a mark of respect for the former Silhouette worker the play was stopped.

Exhibition of photographs, magazines and catalogues from Silhouette

Book available in the shops

Silhouette the new book written by Nigel Hinton is launched.

The new book written by Nigel Hinton called “Silhouette” a short illustrated history of the Silhouette company is almost ready to be delivered to the printers.

Nigel has spent some of the last three years researching the Silhouette company based in Shrewsbury. Once a major employer in Shropshire for over forty years and now the subject of a musical play written by Chris Eldon Lee to be performed at Theatre Severn Shrewsbury and Market Drayton in November.

The book starts with the origins of the business in 1887 in Cologne through the 1930`s in Paris and London right up to date in Europe. Tracing the Lobbenberg and Blumenau family connections with the company through three generations. The book features the origins of Little X the most successful product in the company`s history. The book also contains stories from the employees and looks at the present products being made in Europe.

The book is priced at £10.00 and can be reserved at Pengwern Books inside St Alkmunds Church in Shrewsbury.

The book can also be reserved by contacting the website and giving your contact email address. You will be kept up to date about progress and availability of the book later in 2009.

We are delighted to announce that the company has agreed to re-run the play on 1st, 2nd and 3rd of March 2010 at Theatre Severn in Shrewsbury so contact the Theatre on 01743 281281 or via the website and book on line. Tickets are selling fast so to avoid being disappointed book now.

It is with deep regret I have to report the news of the death of Tom Blumenau OBE; the former Chairman and Managing Director of Corsets Silhouette Limited.

He was awarded the OBE in 2002 for his work in the field of Human Rights. He was a supporter of Amnesty International and one of the founders of Prisoners of Conscience.

Tom was born in Cologne on 6th September 1927 had come to England with his family to escape Hitlers persecution in 1938 at the age of 11.

The Blumenau and Lobbenberg family business moved to Shrewsbury whilst London was being bombed and set up a factory on Monkmoor Road and Coton Hill.

After completing his schooling in England he joined the company and then spent time some time in America studying the way the corset business worked there.

He moved to the London sales offices and had joined the board of Corset Silhouette Ltd before it became a public quoted company in March 1959.

It is their family`s story that is the inspiration behind the musical play “Silhouette” that is being performed at Theatre Severn in November.

Chris Eldon Lee and Nigel Hinton visited him in April 2009 and he was very helpful with details, information and insights into the family business.

He was very interested in the project and had given permission to use some of his personal archive in the production.

He will be missed.

Nigel and Chris visit Tom Blumenau and Peter Lobbenberg in London and get detailed insights into the history of the company.

Information for actors attending the audition on Saturday 23rd are available Contact Nigel Hinton for the draft scripts to audition with.

Auditions at Cross Houses will take place on 23rd May 2009 Please contact us through the website if you intend coming along.

Due to the high demand for tickets for all performances we have decided to add a matinee performance on Saturday afternoon.

Auditions 23rd May details on new page “Our Policies”

It was decided to have a matinee performance in Shrewsbury on Saturday 21st November Tickets will be on sale shortly.

Tickets for all performances are going very quickly already over 50 have been sold for shows at Market Drayton and 150 sold for Shrewsbury performances. Book now to avoid disapointment.

The website is now live. It provides contact information, photos and videos as well as up to date news about the project.