I did a short spell in heat treatment and found it extremely interesting – it is a very precise operation.

Some metals had to be ‘case hardened’ , so as still to retain their characteristics in the core, to improving the working component life or durability, others softened to make them more malleable.

There were other operations that came under ‘heat treatment’ and both Alan and Arty, despite their easy going ways, were both dedicated experts in their chosen field.

Just around the corner from here, big Dave worked in packing. He always had a flat cap on and a pencil behind his ear, blue `bib` overalls with various rulers in the pockets and special re-enforced protective footwear. He was always hammering and sawing as he constructed the crates used to transport the finished articles to their destinations. He was a very likeable fellow with a broad Northern accent.

One day when we returned from lunch, there was a bit of a commotion.

It later transpired that a chap working with Dave in this section had been cutting some wood up on the powerful `band saw`, and had cut right through his fingers on the one hand! He was rushed to hospital were the fingers (somebody had the presence of mind to pick them up) were sewn back on again. These days, with micro surgery it is a fairly commonplace procedure, but then it was unheard of. I think the operation was a success but whether or not the fella regained complete control over the fingers on this hand-I know not. Accidents were the exception and fortunately, not the norm`-health and safety was always pretty high on the agenda.

The chap that picked up the fingers and put them into an ice bucket was himself `shaken up` and to be taken to the canteen for a good, strong cup of tea!

Talking of big Dave’s footwear has reminded me that we all had to wear, by law, protective shoes with metal toe inserts.

I was coming in, one morning, still half asleep, probably after a particularly heavy session the night before, and cutting it fine (as usual) when, as I clocked in a huge cheer went up throughout the whole bay. I was in a stupor so paid little attention, but the calls and whistling continued and it finally dawned on me that I was the cause of all the excitement-I still had my bright red plastic carpet slippers on! I had to go back home and change into the regulation footwear, but not before I had been informed that I would lose one hours pay. Everyone thought it was hilarious except for me-needless to say, I didn’t do it again. I must have looked very strange in full motorbike kit, on my BSA `Bantam`, with bright red carpet slippers, as I made my way back home -it was the talk of the factory and everywhere I went that day, people were making remark about it.

At some time, during the earlier part of my apprenticeship, I heard about this very unusual bike someone who lived just opposite the factory, had for sale-I had never seen anything like it-it was absolutely fabulous-a Douglas Mk 1, with horizontal `pots.` I fell in love with it immediately and decided to have it (much to dad’s disgust as, in his eyes, I was still a minor and should not, even though I was working, have any say in what I spent my money on). 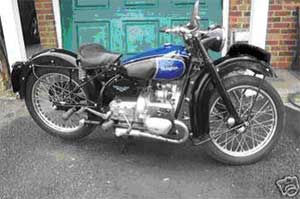 I remember it needed to have a special `woodruff key (half moon shaped) in the kick start shaft, as it has sheered at some previous juncture-but this was a small problem for a `man` of my considerable connections and, pretty soon, I had one, fitted it and was mobile!

Whilst at Hall Engineering I made many modifications (customising it, was the `in `phrase) Some time later, when dad had calmed down, he told me of another Douglas that a friend of his was selling, and we went out to see it at a little hamlet near to Hodnet. I was astonished to see it-a later model-the `Dragonfly and was a very unusual machine. For some unknown reason, I do not have even one single photograph of me with my beloved Dragonfly, but I have managed to find one of machines in it’s original condition (mine obviously had lots of `extras` on it. I recall that the Mk1 had twin carburettors which seemed to give some trouble as they were invariably unbalanced, no matter how much you `tweaked` them and were supplying different amounts of fuel to each pot.

The dragonfly had a single, centrally placed one, which supplied both pistons and seemed to work better.

The Mk 1 had a magneto generated spark system which was good, but the Dragonfly had electric ignition ,so I took the gears off the one and with some help from one of my pals in the machine shop, designed and cut a new neoprene cog and `grafted` it on the dragonfly.

The machine I finished up with was a combination of both, but, for a 350 cc, it `went like a dingbat!`

What eventually happened to the Mk1 –I know not, but, with me regularly robbing it for spares for my new machine, it became a skeleton and I suppose dad decreed it had to be disposed of!

In its smart green and cream livery, massive engine block with flat side `pots`, chrome guards and front and back telescopic suspension-the Dragonfly was quite something, even though it did look a bit like a tank with two wheels!

I also made some `posh` brake cooling guards for the wheels out of sheet aluminium-they were all the rage on the racing circuits, but in my case they were only ornamental:-obviously the standard exhaust system just had to be modified-and it was!

I was always fiddling about with it-it was my` baby` and, like me, it had to create an impression!

Back at Halls, I would like to stress, at this juncture, that I did have to do some factory work, from time to time and one fella whom I was apprenticed to was very keen to see that I complied in this respect. 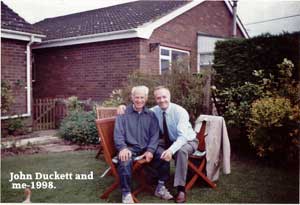 His name was Johnny Duckett. He was probably amongst the handful of people in my life that have been truly instrumental-such was the profound effect he had on me that I kept in contact with him right up until he passed away several years ago.

When I first went to work with him, I thought to myself that he was a bit of a miserable sod-when you are a youngster, you see anyone who does not agree immediately with your point of view thus- how wrong can you be?!

He turned out to be very humorous, precise to a fault, articulate in every mission he had for the company and he had this sort of way of getting the very best out of a person. He was, initially, a bit bemused by this gangly lad, with a mop of hair, that management had sent to be with him for six months, but I learned more from him than he did from me!