Many of the skilled men there were already mates of mine, and I was on `first name` terms with them. Vic Breeme (I think that was his name)was the machine shop tool setter there. He was an extremely personable and competent man whose job carried a lot of responsibility.

I was set to work on a Capstan lathe. It was far more `up to date` than the ones in the training shop, but I very soon got the `hang of it`. These were extremely dangerous machines and had to be treated with the utmost of respect. When leaning near a `chuck` (a device for holding the component to be turned) that can be revolving at thousands of revolutions per minute, the last thing you need is something dangling loose near the working area. One of the other apprentices (whom, for some peculiar reason I did not know well!) had long hair (which was the vogue then). He had repeatedly been advised, by Harry Barber, to get it cut, but he chose to ignore these warnings and, one day, whilst checking something or other on an operative lathe, his hair got caught in the revolving` job` and he was virtually scalped in a matter of seconds! It was not a pretty sight.

He was lucky that his hair was all he lost, as these machines have to cut up metal at the rate they do have terrific strength and they do not stop for mere skin and bones! Fortunately, because of factory regulations even then, there were red buttons, at various places in each `bay`, that would immediately immobilise all the machines in that location. Someone heard his piercing screams above the din and luckily for him, had the presence of mind to push one. It was a lesson learned the hard way(I presume his hair grew back, but he kept it short).

This horrific consequence made us all, once again, aware of what a potentially dangerous place a factory can be. There was no room for complacency. I do remember that the lad never returned – that experience will probably haunt him `til the end of his life.

We apprentices (as you can see) were not `backward in coming forward` and one day I challenged Vic to a screw turning contest. I had been put to turn a batch of screws. They were to a certain specification, with a shoulder incorporated, but I had already run so many off that I thought I could almost do it with my eyes closed (I didn’t, I hasten to add).

Vic was not only an expert tool setter but a `time served` and accomplished turner. I could see my previous boss from his raised platform area in the inspection department, looking over his glasses when he heard of this, tutting his disapproval and shaking his head, but Vic accepted the challenge. I and another lad equalled his score – he couldn`t believe it! On inspection we were told that we had been pushing the machine and metal to their very limits and that the whole batch would have to be rejected! However, when the random check was made, it was established that the lot were within the tolerance even though my `friend` picked out a further handful and examined them under a microscope.

It did nothing to further enhance our relationship, but I gained a further bit of `cred.`

Whilst in the machine shop (light engineering) I had a spell working in safes (and I do mean working inside sometimes). Hall Engineering was the parent company (I think) of Chatwood Milner the famous safe making company – they made safes for many applications all over the world. I recently saw one in an old `black and white` movie film, made during this period. It was in a bank somewhere in an exotic location.

I learned much ,again, in this department, especially about locks, but I did not envisage eventually becoming a locksmith or (financially better still) a `safe cracker` with some band of robbers! As with all my other endeavours at this time, I just took it for granted that the skills I learned were routine. I was just another lad who thought he knew everything (I see differently now)! I could, at one stage in this department, open locks on safes that were going into banks and secure buildings to store some pretty valuable stuff, but I was pre-occupied with other adventures… I had a steady girlfriend and was a member of Shropshire’s well known `pop group` – the Karackters.

Just a point of interest which is relevant to my time at Hall Engineering. We had to wear green overalls to signify that we were only apprentices. I later, somewhat cockily (as was my disposition) took to wearing a brown coat over these. Anyway, my father (I was still living at home) said to me angrily one night, after I came back from my girlfriends (which I went to straight from work) – “why don’t you come home first and get a wash and change before seeing `that girl` (all my girlfriends were addressed as such by him) – it’s disgusting visiting her in your works overalls!”

Little did he know that she had a `penchant` for mucky fellas in overalls and I was availing myself of this opportunity which presented itself on a very regular basis!!?

Just a little way along was the paint spraying booth. I also spent some time here and made some further valuable `connections`. This area was sealed off and protective clothing had to be worn, with special breathing apparatus whilst inside. We were spraying panels for cars that had been pressed in the die shop, so the end result had to be perfect and the standards demanded, as elsewhere, were always very high. Also, in this section, were assembled the beam setters I spoke about earlier.

Not everywhere I went was I made welcome, but I got on with most who just accepted my somewhat unorthodox ways. One place where you were always guaranteed a welcome (in the factual and social sense) was the Heat treatment department. Two of my very best friends at this time worked in there. 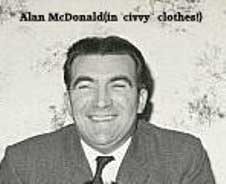 Alan Macdonald was the younger of the two – a cheeky `chappie` from Liverpool way-with a big saucy grin and a mass of black hair swept back and tightly clinging to his head(anchored down ,no doubt, by a liberal helping of Brylcreem(hair gel) I used to frequently visit there, when sent on an errand to the stores. I could always say that there was some hold up or hitch responsible for my tardy return, but I did get into trouble several times when the skilled men were hanging around ,holding the `factory job` up whilst I was away, supposedly getting the stuff they required.

In the heat treatment, Alan`s language (together with the bigger part of the factory) was a bit choice and although I have never, ever felt a need to use it myself, it didn’t offend me. The lovely part about this, at that time, is that all bad language and habits were left, each night, at the factory gates! Whenever I went in here, Alan would have a new joke-and he could put it over well. He had hundreds of them, most, absolutely disgusting!

He knew I was in a long standing relationship and would regularly quip, as soon as he spotted me, coming through the sliding doors with my green overalls on, ”watch out, here comes the Bodger-it looks, by the state of him, that he’s been on the `nest` all night-lecherous sod!” 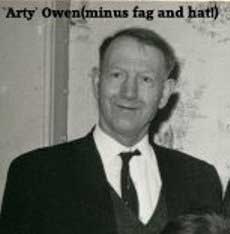 Arthur was the older of the two-he always had a small, flattened piece of a `roll up` fag in his mouth and it would rest, stuck by saliva, on his bottom lip as he talked to you-it was never lit. I couldn’t take my eyes of it-it defied all gravity laws! I felt sure it would lose its adhesion and fall, but it never did. I surmised that he used to go to bed with that in his mouth and his trusty, tartan flat cap on – I only once saw him, even on social occasions out of the factory, without either! Dear old `Arty` as he was known-we had many a laugh together-he was a true gentleman in all senses of the word. For some unknown reason one event of total insignificance in there stays with me to this day. This bay, because of the dangerous chemicals used in the treatment of metals, was a` shop` all on it’s own, in an outside location (but next to `goods outward`) where toxic fumes could soon disperse. Cyanide (used to case harden steel) was used, and meticulous safety precautions were observed. but a cuppa was always `the order of the day`. Strictly speaking, no unauthorised personnel were allowed in there, but it was a meeting place for a good laugh, a bit of gossip and a cuppa. (I always prayed they had washed their hands thoroughly, before making mine) there was much humour in there and even the bosses would frequently visit (probably on a `factory based mission`-not like me)but it was never forgotten how deadly a mistake could be, and strict hygiene rules were observed. When Alan and Arty were taking a job out of a `bath` or a furnace, we observed a solemn silence until the job was done.

Anyway, one day, Arty was boiling a kettle for our cuppa and Alan and I were standing at the bottom of of the bay(he was probably telling me another one of his `risqué` stories!)when he happened to notice that his mate was also talking to someone at the other end of the bay. The kettle had boiled, but so busy was Arty in conversation, that he let it `go off the boil.` Alan turned to me and said,” look at my mate-he’s let that water go off the boil, and you cannot make tea with water, thus”. I suppose I thought it funny at the time, with all the mega important things this very experienced man had to undertake, but he got it into correct prospective-`a man cannot do his best without a cuppa first!”

Why that incident has stayed with me I know not, but it is probably indicative, in some way, of the attention to detail that was instilled in me during my time at Hall Engineering.