As, in all parts of life there are the `freeloaders`,the bullsh**ters and flannellers, who really only got on because of the expertise of others.

I met one such fellow (who shall remain nameless) who took an instant dislike to me, as I did to him! He was one of the chiefs on inspection, in the machine shop. His comments, and marks on my performance whilst there were reflective of this. To be fair, I think he disliked my general ‘cockiness’ and felt `ill at ease` with my `connections` and the general `air of importance` I gave myself! Today, as an older and much wiser person I see things from a completely different perspective!

One of his colleagues, Bob Witney, was politeness itself and was always ready to talk to us apprentices on a level that we all felt comfortable with. I’m not for one minute insinuating that this other person was a complete idiot, but he did rely a great deal on what we called `kidology`, and unfortunately we youngsters saw completely through it. I felt I learned much during my time on inspection- it taught me thoroughness and attention to detail-something that has stayed with me throughout life. We were doing random checks on very large `runs` and it was therefore essential that any, even the minutest error was discovered early as if left, it could magnify and develop into a large problem, resulting in a massive loss of material and time. We were regularly working in tolerances of thousands of an inch (it was all `imperial` measurement then)-fairly challenging work.

I was still keeping my `foreigners` going (much to this person’s displeasure!) I think he once, exasperated by my antics, reported me to the works manager (and supposedly, personal friend of his) but he got `short shrift` there, as I was working on a ` – project` for his wife- lovely, ain`t it?! I couldn’t help but chuckle (wickedly) to myself as his normally ruddy complexion seemed even redder that week and the little tuft of hair on the side of his head was all of a quiver.! He was `huffing and puffing` and sighing more than usual and his chest, in that long white coat that was his `trademark` was pushed out as far as is humanly possible, without a nasty accident occurring.

We kept a respectable distance (by unspoken mutual agreement) after that little episode and he was somewhat reluctant to `cross swords` with me again, but he had the last laugh as his words in my report of the time spent in inspection were less than favourable,and I got a `rocket` from Harry Barber!

Right next to the inspection department was the `works stores`. The whole factory was supplied with tools from this little service hatch. The two fellas in there were definitely full of their own importance. It was `dockets for this, dockets for that`-they were the quintessential `jobsworths` – I used to say (somewhat cheekily) `dockets to both of them!` I only ever saw them behind this little square opening-they could have been a couple of `glove puppets` for all I knew.

If you `signed out` for any tool it had to be returned (and, I suppose, rightly so) or, if broken, a replacement `chitty` authorised by a `section head`, had to be provided. I had all sorts of `dodges` and fairly `tied them up in circles`, but they never `twigged it.`.

Brian Clewes and the Rolls Royce of Go-carts

My good mate, Brian Clewes, worked in the other side of the stores department, where all manner of metals were cut and sawn to length. One year he happened to mention that his young son would like a pedal powered `go cart` for Christmas, but not one that it falls to pieces by about three days into the new Year……..no, he wanted something a `bit special.`

“Let me know what materials you need and I`ll sort you out some from the scrap bin”, he added.

I spent a lot of time designing it and when finished it truly was `something else!` Even my dad was impressed – praise indeed, as we were often `at odds` – it was a `Rolls Royce of go carts`(even they, I surmised, would not fail to be impressed with my design!?) – phosphor bronze bearings (made from scrap of surplus metal from a `run`(turned by the afore(not)mentioned `connection in the light engineering shop)each with independent grease nipples! With some silver and chequered tape (which I bought at a local `do-it –yourself` shop) strategically placed around the polished aluminium frame and its red `beamsetter wheels(`culled` from the scrap bin ,I hasten to add-we used to assemble the machines used in garages throughout the land, to check and re-align motor vehicles headlamp beams during MOT inspections)it was the business. It was built throughout with lightweight, quality materials. 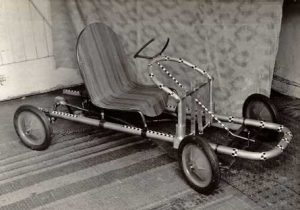 Another `connection` in the `goods outward` department arranged for the car to be strapped to the underside of a lorry to get it out through the factory gates-`wot a hoot!` Brian said his lad was `thrilled to bits` when he saw what `Santa` had brought him on Christmas morn` ,and all his mates and their parents were dumbstruck when they saw it too!

Anyway, after my time on inspection, I moved back into the bay for my mandatory spell and then into the machine shop.